Saint Paul police are investigating a shooting that left an adult male and juvenile male injured in the evening hours of Sunday, Oct. 6.

Officers were dispatched to the 400 block of Wabasha Street South at approximately 5:15 p.m. on a report of shots fired. Multiple 911 callers reported hearing gun shots and some were more specific, saying that a vehicle had crashed and rolled over with victims inside. 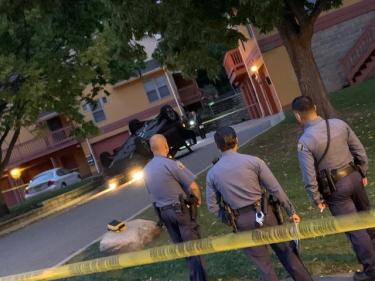 The adult male is in grave condition with life threatening injuries. The 4 year old’s injury was not life-threatening.

Officers on scene secured the crime scene and began to look for witnesses. Investigators are also scene canvassing the area for any evidence that leads them to who is responsible for this shooting. Anyone with information in relation to this incident is encouraged to call 651-266-5650.

Any updates in relation to this incident will be released on our Saint Paul Police Department Twitter account, @sppdmn as are available.