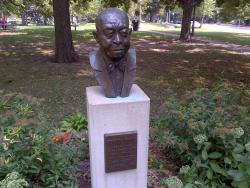 Artist Name: J. Paul Nesse
Media: Bronze with tan, blue and brown patina; Pedestal: Concrete
Date Created: 5/1/1976
Location: Boyd Park
History: Born in Atchison, Kansas, to a Kentuckian and an African American, Frank Boyd organized the Pullman Porters of St. Paul.  In 1926, Boyd became an officer in the Brotherhood of Sleeping Car Porters, Twin Cities Division.  Because of his organizing activities, the Pullman Company fired him.  He was one of the first two African American electors in the history of the Democratic Party; consequently, in 1944, he attended Franklin D. Roosevelt’s inauguration ceremony as a member of the electoral college.

Born in Montana around 1951, Nesse cultivated an interest in cars early in life.  These provided the first models for his sculptures.  He worked in a bookstore until the demand for his sculptures increased.  Gradually, people began requesting portraits from him, sometimes with a car.  Before long, his sculptures produced enough income to sustain him and his family.  Presently, Nesse works from his studio near Stillwater, Minnesota while collectors around the world display his pieces.