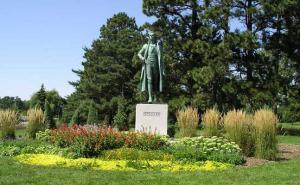 Artist Name: Ignatium Taschner
Media: Bronze; Base: Vermont Granite
Date Created: 1/1/1905
Location: Como Park
History: The sculpture, built in Berlin and donated by the German citizens of St. Paul, commemorates the renowned German philosopher, poet, and dramatist, Johann von Schiller. Born in 1759, to a military doctor, Schiller moved around as a child. He learned Latin and Greek from the pastor of Lorch and studied medicine at the Karlsschule Stuggart, where he wrote his first play. Because of this play, he became an honorary member of the French Republic; but in his hometown he suffered arrest and a severe warning not to publish any more works.  Schiller later cultivated a friendship with Johann Wolfgang Goethe, and together they founded the Weimar Theater. He died at age forty-five from tuberculosis. Schiller’s enthusiastic optimism lives on as his works continue to encourage many Germans.