Work on the Capital City Bikeway Interim Design Study continues. The project team has first focused on implementing the 9th/10th Street bikeway in 2020.

Prior to the pandemic, the City held three open houses to gather community input about the St. Peter Street or Wabasha Street bikeway. Saint Paul Public Works is using the community feedback it received to finalize the project recommendations. These recommendations will be shared publicly in a recorded video presentation available on this webpage in the next couple of months.

The video presentation will include a general project update, discussion of interim and long-term design concepts, and Public Works’ recommendation for the segment of the Capital City Bikeway located on one of three corridors:

There will be an opportunity to submit questions and/or share comments via an online form on this webpage. The project will also have a public hearing before the City Council at a future date to be determined.

The segment of 10th Street between Dorothy Day Place and St. Peter Street will be implemented in spring 2021.

Addition of the bikeway on 9th Street and 10th Street includes the following changes to the roads:

What is the Capital City Bikeway?

The Capital City Bikeway is a planned network of bicycle facilities throughout downtown Saint Paul. The bikeway network will connect to existing trails and on-street bikeways, allowing people comfortable and convenient bicycle access to and through downtown.

The development of bicycle facilities in the downtown was a top priority of the Saint Paul Bicycle Plan, adopted by City Council in March 2015. Following the adoption of the City’s Bicycle Plan, the City developed the Capital City Bikeway: Network Study and Design Guide in 2016, which includes a bikeway network study, bikeway network map, bikeway design guide, and bikeway implementation plan.

What is the Interim Design Study? 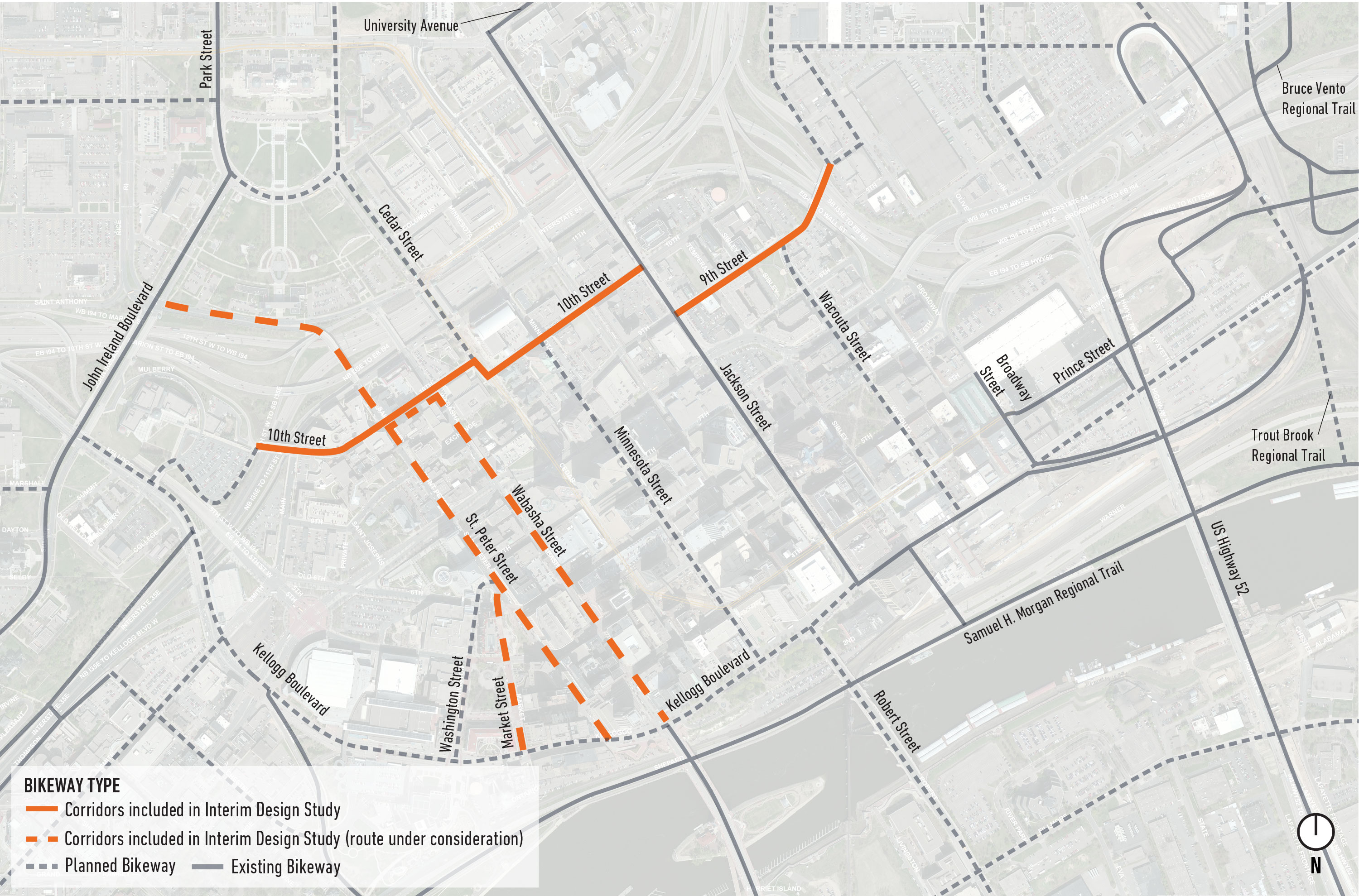 The bikeway designs are considered “interim” because they will be at street-level and incorporated into the existing, between-the-curbs street width. The long-term vision for each of these segments is to develop protected bikeways, but design and development of those bikeways will likely not happen until there are full street reconstruction projects along each segment.

The Capital City Bikeway: Network Study and Design Guide recommended St. Peter Street as the primary north/south route on the west side of downtown. This project will include an evaluation of two potential routes - St. Peter Street or Wabasha Street - as well as engagement with stakeholders to help arrive at a recommended route alignment.

Saint Paul City Council held a public hearing on the proposed plan to implement the Interim Capital City Bikeway design on 9th Street and 10th Street between Dorothy Day Place and the I-94 bridge on Wednesday, May 6 at 3:30 p.m., with an opportunity for public comment.

This was an opportunity to see and provide feedback on updated design concepts, including the recommended design for 9th Street/10th Street corridor.

This was an opportunity to provide feedback on design concepts for different segments of 9th Street/10th Street and different configurations of bike lanes on St. Peter Street, St. Peter Street/Market Street, and Wabasha Street.

This was the first opportunity to learn about the project and provide some initial feedback about the corridors.