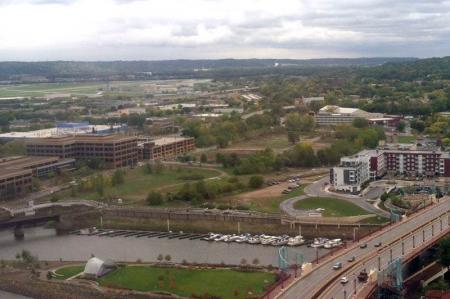 The West Side Flats will have strong physical and visual connections to the river's edge and bluffs, walk/bike-friendly streets, a well-designed network of public spaces, restored natural systems, urban neighborhood design, a complementary mix of high-quality and human-scaled buildings, a variety of housing types and public art.

The West Side Flats will recapture its identity as a place that welcomes and integrates a broad mix of people, cultures and destinations into a vibrant mixed-use community. By restoring a more balanced mix of neighborhood, business and natural systems, it will be a model for economic, environmental and social sustainability. The employment-oriented district will continue to provide high-paying commercial/industrial job opportunities for the region and local residents, as it evolves into a more diverse, higher-intensity, and visually attractive business district over time.

In 2014 Sherman Associates opened the first apartment building at West Side Flats, featuring 178 mixed-income apartment units, which are nearly 100% occupied.

Sherman Associates is planning the next phase of development (West Side Flats Phase III) at the northwest corner of Livingston and Fillmore avenues. The project includes two buildings totaling 264 apartment units with a mix of market-rate and affordable housing. One of the buildings in the new phase of development will be passive house, an ultra-low energy building that requires little energy for heating or cooling. This is on track to be the first passive house apartment building completed in the Twin Cities Metro Area. The City of Saint Paul is currently reviewing the site plans, and construction is anticipated to begin in 2017.

Sherman Associates is also considering a commercial development (West Side Flats Phase II) at the southeast end of the Wabasha Bridge.

Weidner Apartment Homes is planning to build a multi-block development with 700 residential units in West Side Flats from Fillmore Avenue E to Plato Boulevard W. The development is still in the planning stages and has received $1 million from the Metropolitan Council and the Minnesota Department of Employment and Economic Development for environmental cleanup on the property.

To meet the site’s increased stormwater management needs due to the new developments, the City of Saint Paul is planning to build a scenic greenway that would serve as both stormwater infrastructure and public open space. The 1,450-foot-wide, six-acre greenway will extend from the Mississippi River levee through the development. The greenway will help clean and filter the water before it is ultimately conveyed into the Mississippi River and will provide the community and residents with an attractive green space amenity with pedestrian and bike paths that will link to the Mississippi River. The greenway is a part of the City’s overall effort to develop innovative stormwater management techniques that use rain as a resource.

The West Side Flats Greenway project offers an opportunity for private property owners within the West Side Flats neighborhood to partner with the City of Saint Paul on a shared stacked-function green infrastructure concept. The greenway is in the final schematic design stage, and the initial phase of construction is expected to begin in 2017.

The City worked closely with the West Side Community Organization to seek community input to refine a master plan to guide the future development of the area. The West Side Flats Master Plan and Development Guidelines was adopted by the Saint Paul City Council in June 2015. In addition, the City Council approved the rezoning of approximately 35 parcels to allow implementation of the Master Plan (higher density, mixed-used development).

Already, significant redevelopment is planned for the area bounded by Fillmore, Robert, Plato and the railroad tracks. The City looks forward to working with its partners in creating the West Side Flats Urban Village consistent with the master plan. 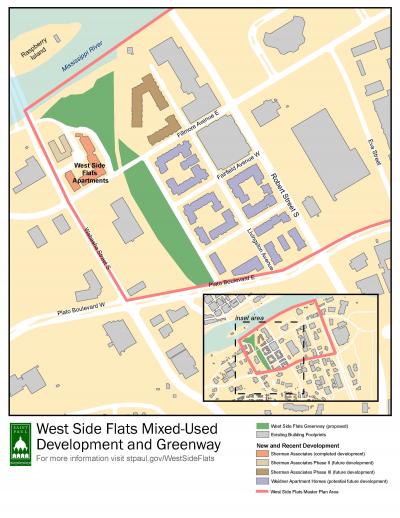