November 4, 2019: First day of demolition.  Crews work as snow and sleet falls, breaking the concrete deck down onto Ayd Mill Road.  Concrete produced in demolition will be hauled to a crusher for re-use as aggregate; steel will be melted and recycled. 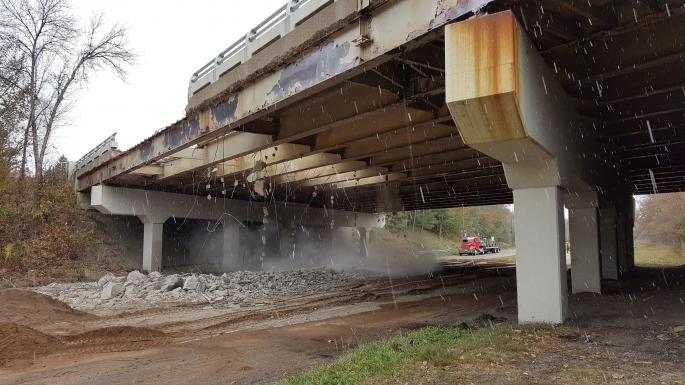 November 11, 2019: Demolition continues.  Concrete debris is cleared from west abutment (foreground).  In the background, a crane lifts off steel beams while an excavator removes deck slabs.  Bridge deck over the railroad is cut into large pieces (slabs) to prevent damaging stones that date to the 1897 bridge. 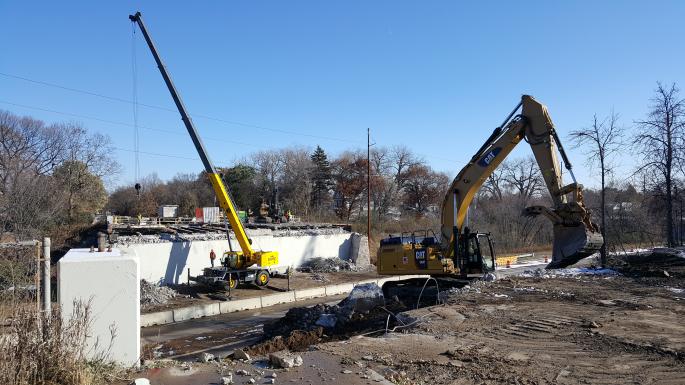 November 22, 2019: Demolition nearly complete.  A crane prepares to lift and remove the final steel girder from above the rail tracks.  To meet current railway standards, the new bridge beams will provide an additional 3 feet of clearance over the railroad tracks. 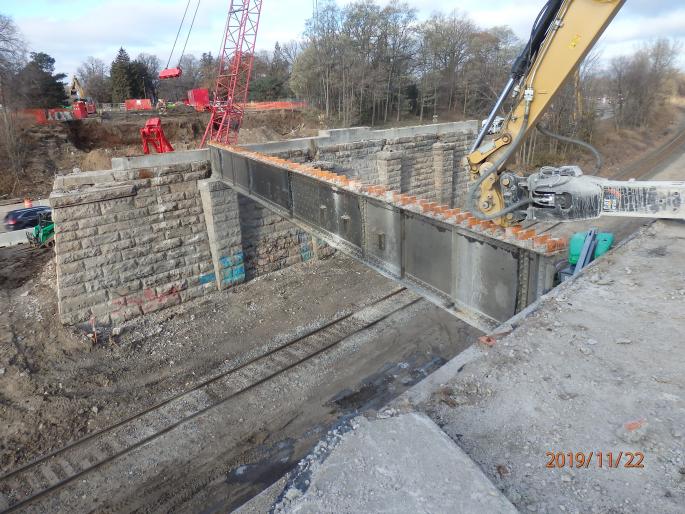 December 2, 2019: Soils are excavated and hauled out behind the west abutment.  Ayd Mill Road has been reduced to one lane in each direction underneath the bridge, providing a protected work space for worker and equipment access. 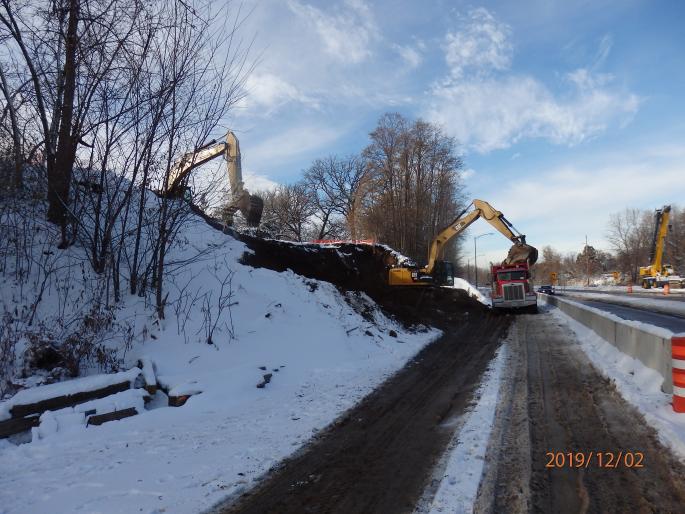 December 9, 2019: The first steel pile is driven into the ground to support the west bridge abutment.  The pile are being driven to the shale bedrock, which is located around 25 feet below the elevation of Ayd Mill Road. 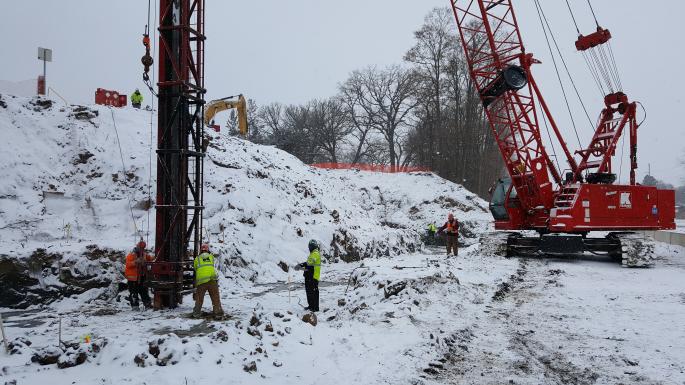 December 19, 2019: A rotary drill rig drills 30-inch diameter shafts into the ground around 30 feet.  A rebar cage is inserted into the hole and it is filled with concrete.  The finished shafts will provide a solid support for the east abutment and central pier. 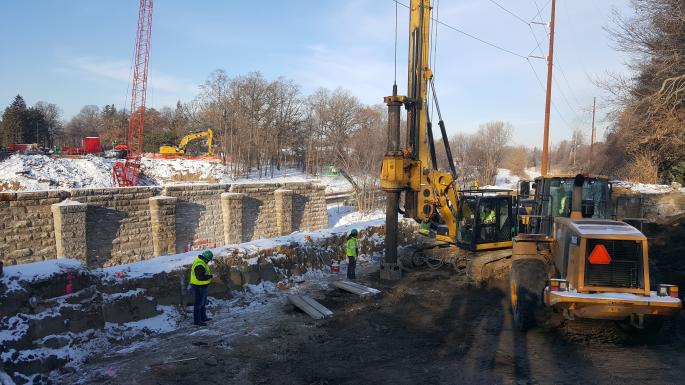 January 8, 2020: Crews tie steel bar reinforcement that will be poured into the concrete for the west abutment stem wall.  Steel rebar gives the concrete wall the tensile strength required to resist bending and shearing forces. 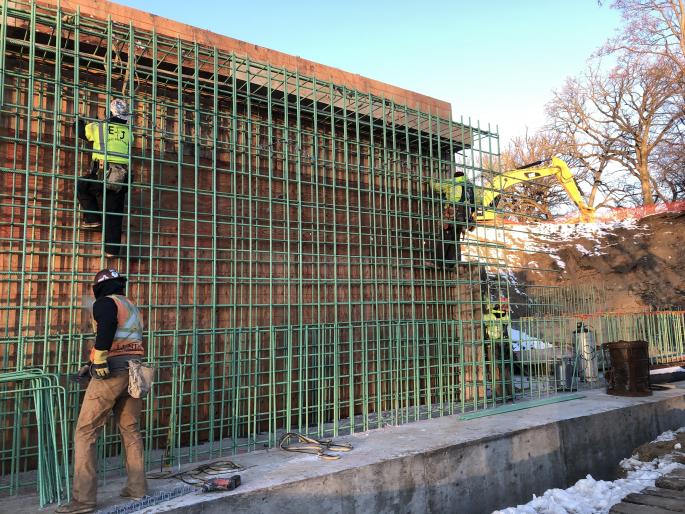 February 27, 2020: A worker ties final reinforcing steel bars as the rest of the crew waits to place the wall form in the southwest abutment corner.  Note the "rustication strips" nailed into the in-place form, which will create a staggered block pattern to the finished wall face. 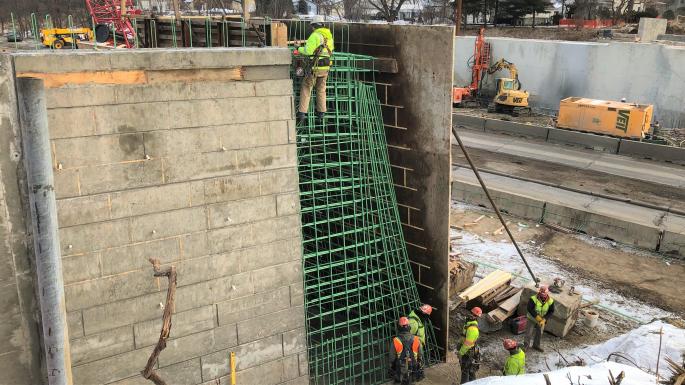 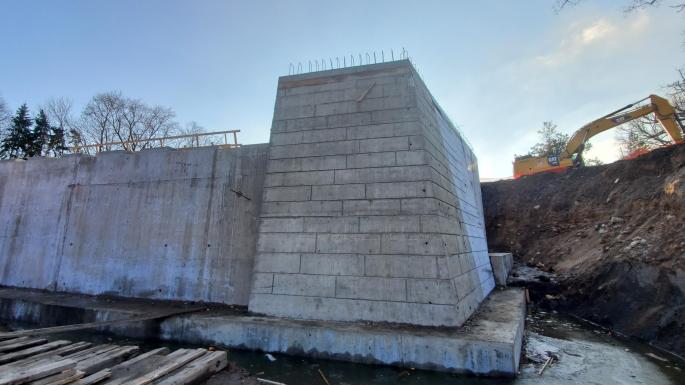 March 23, 2020: The stone in the foreground is trimmed and ready to connect to new concrete retaining walls.  The bars sticking up in the right side of the photo are extending from deep concrete foundations, and will be cast into the tall pier wall that will support the beams and bridge deck.  To the far right of the photo, the first section of wall forms has been set.  The east abutment is visible in the background (left side of the photo). 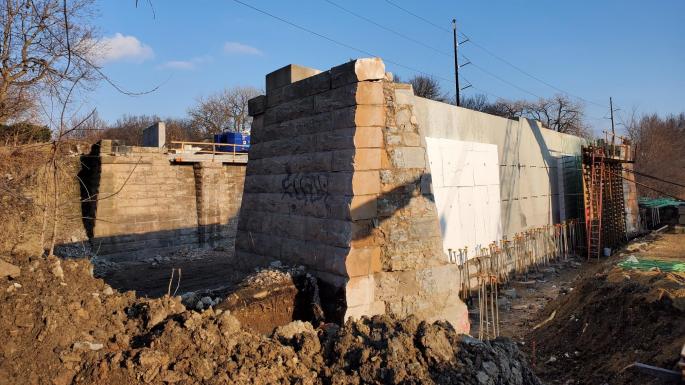 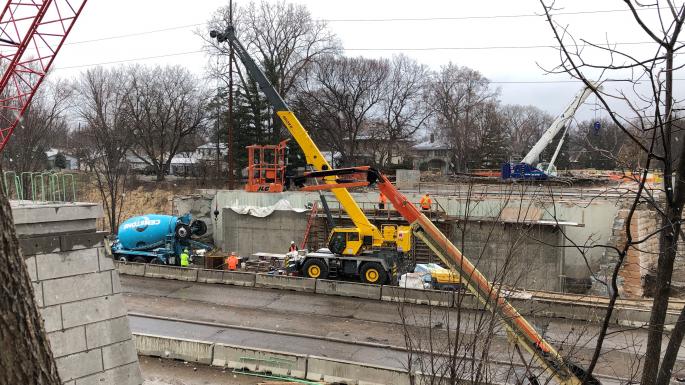 April 17, 2020: Storm water utilities are being reconstructed east of the bridge to improve drainage of the road.  Following utility installations, the road base will be replaced with compacted aggregate and later paved in asphalt. 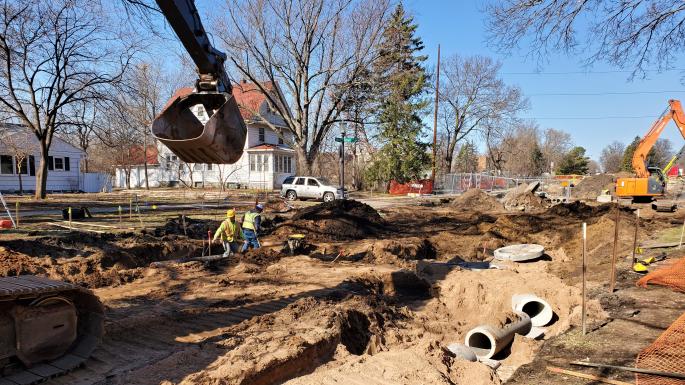 April 17, 2020: Construction is starting on retaining walls.  The new retaining walls will connect to the existing center pier.  The stones visible in this photograph are original to the 1897 bridge.  The blueish limestones (photo right) were likely from the local area, whereas the tan sandstones (photo left) were likely sourced from elsewhere in the Midwest and transported to the site via rail.  The sandstone is in surprisingly good condition considering its age.  The black writing seen painted on the stone is also over 120 years old, and appears to indicate the stone's rough dimensions and its relative location in the structure. 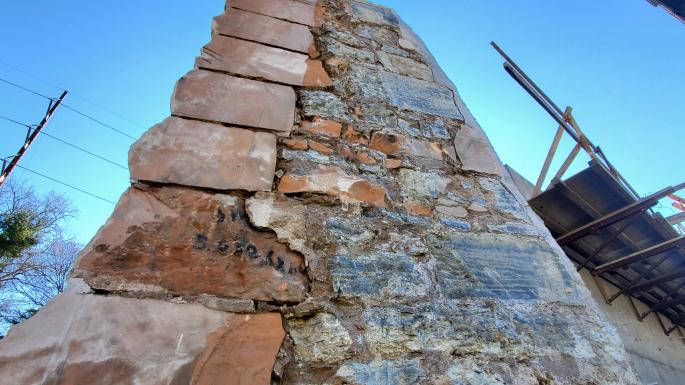 April 29, 2020: The fourth bridge beam is being set over the Canadian Pacific Railway tracks.  Prestressed concrete beams get their incredible strength from multiple strands of steel wires.  The wires are draped through forms and then tensioned with a total force of around 2 million pounds while high-strength concrete is cast around them.  The largest beams on this project will span 124 feet and weigh over 100,000 pounds. 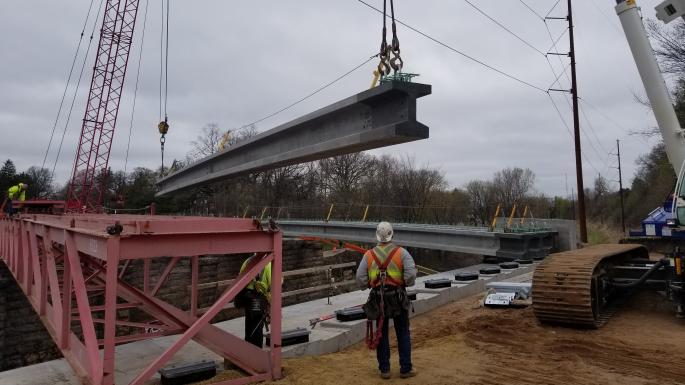 May 13, 2020: The first two layers (lifts) of asphalt are placed on the approach road east of the bridge.  The final driving surface will be provided by a third lift at the close of the project.  Occasional road closure will be needed to install roadside utilities, sidewalk and boulevard sod. 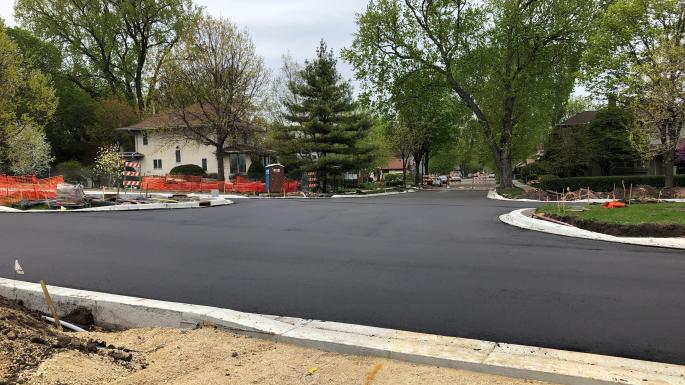 May 15, 2020: The yellow brackets installed on beams (prior to setting) hold safety cables that workers 'clip off' to while walking on the beams to set deck forms.  The green hoops sticking up from the beams are epoxy-coated reinforcing steel, and will be embedded into the poured concrete deck. 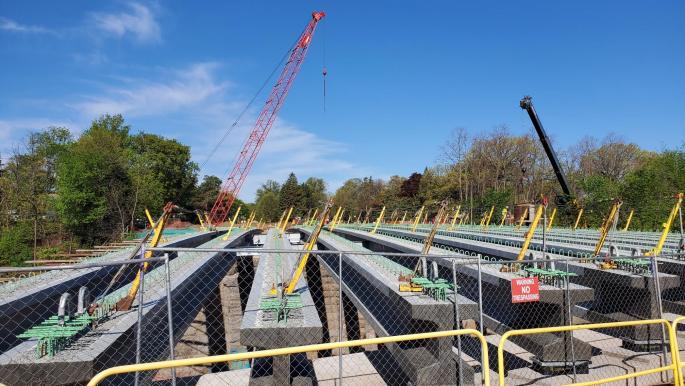 June 4, 2020: The road approaching the bridge is divided into separate east and west lanes, with a large grass median in between.  The median west of the bridge is being converted into a large filtration system.  Rainwater runoff from the bridge and nearby roads will flow into a large basin.  The basin will be filled with an upper layer of large rock (to store runoff) and a lower layer of sand (to control filtration rate).  Once filtered, drain pipes at the bottom of the basin will return the water to the underground storm piping network that makes its way to the Mississippi River.  The entire system will be hidden from view, beneath the new landscaped median. 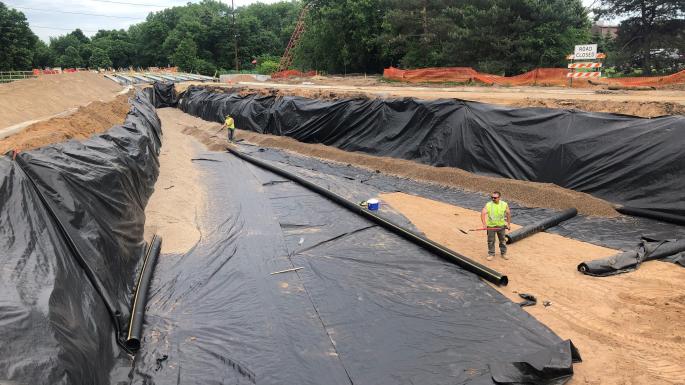 June 12, 2020: After beams are in place, decking crews hang triangular overhang brackets on the outside (fascia) beams and smaller hangers on the interior beams.  The brackets and hangers are adjusted to support lumber and plywood that forms the underside of the bridge deck at heights specified by the engineer.  After the deck is poured these forming pieces are removed.  Deck forming is a major process and takes several weeks to complete; the picture below shows the decking forms reaching the far (west) end of the bridge. 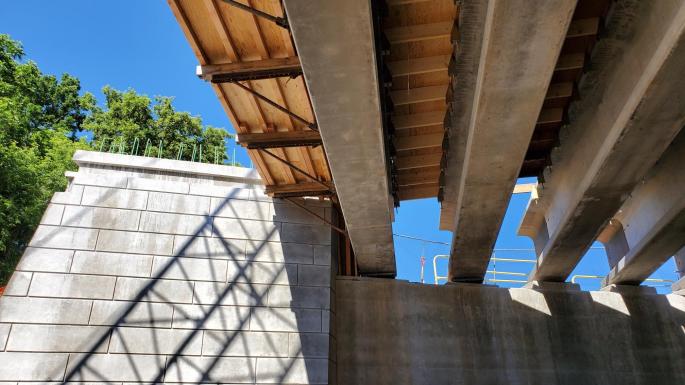 July 2, 2020: The following series of photographs shows one of the major events of bridge construction: placement of the structural concrete deck on the beams.  A large crew - plus inspectors, engineers, project managers and suppliers - worked a long day to place over 500 cubic yards of concrete in a single, continuous pour.  Concrete was delivered in over 50 truck loads and transferred to the deck using a pump truck and a conveyor belt system.  Once placed and finished, the concrete was covered in wet burlap and plastic sheeting, where it was allowed to cure for 7 days. 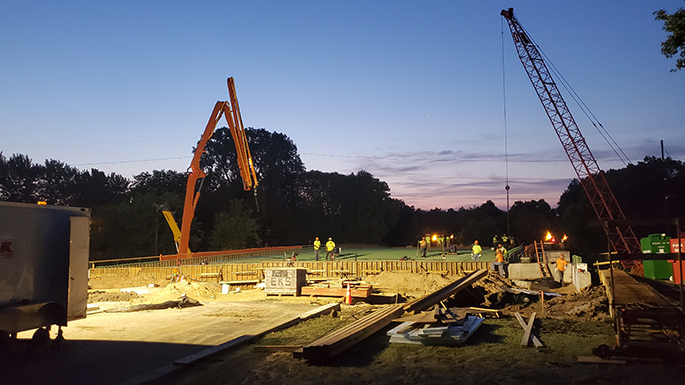 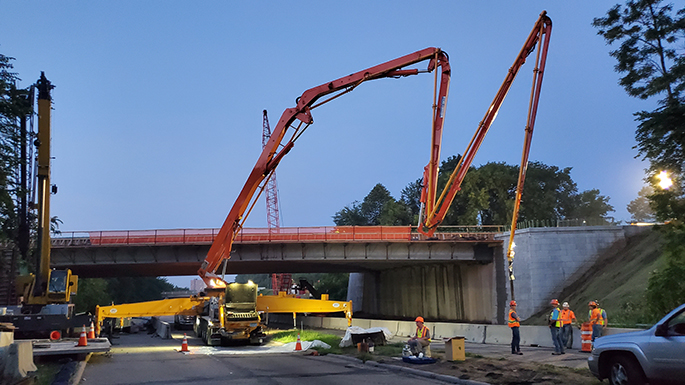 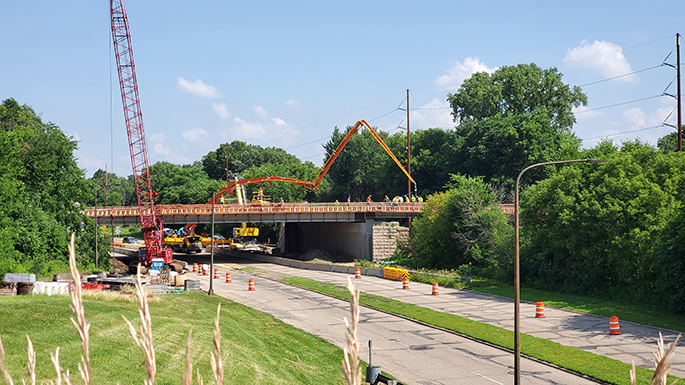 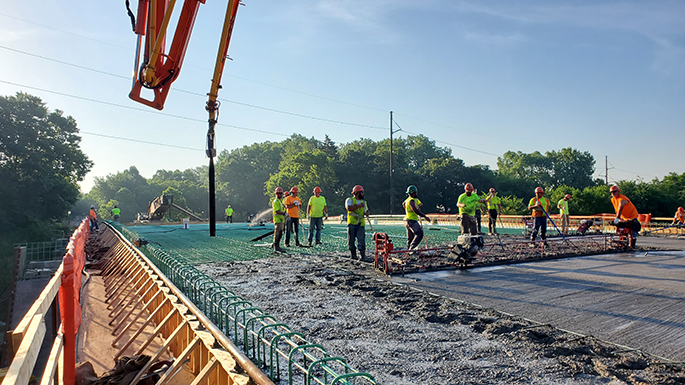 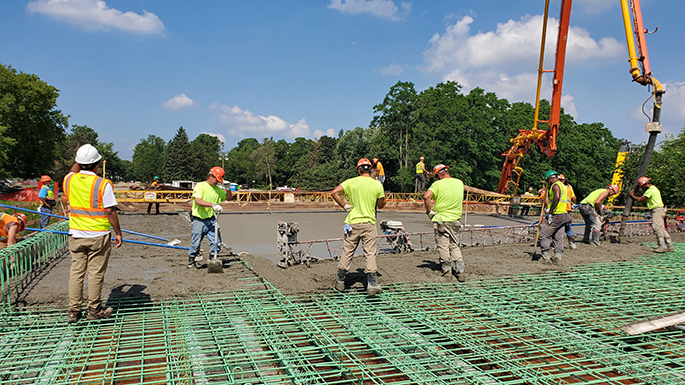 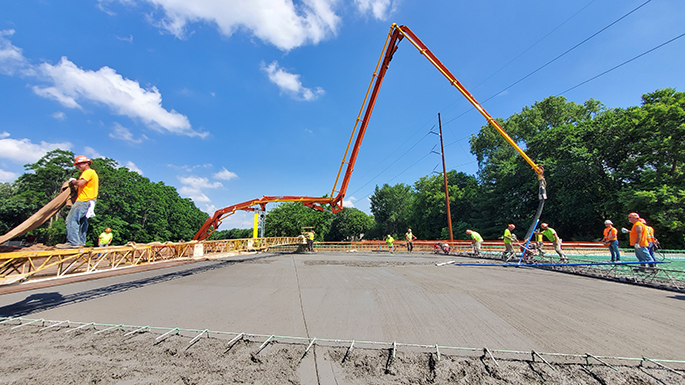 Summit Avenue Bridge spans over Ayd Mill Road and the Canadian Pacific Railroad.  The bridge and approach roadways will be reconstructed in 2019 and 2020.  The new bridge is scheduled to reopen by October 1, 2020.

The first bridge at this location dated to the late 1800s, presumably built to span over the "Short Line" Railroad.  Little is known about this first structure, except that in 1897 accounts label it as a "narrow and unslightly wooden bridge which...disfigured the avenue."  That same year, the wooden bridge was replaced by an "iron bridge 100 feet wide" and with massive stone abutments.  That bridge structure was modified and augmented in 1962 to span over Ayd Mill Road, which was envisioned to be a highway connection between I-94 and I-35E.  The function and future of Ayd Mill Road has been debated ever since.  However, as it relates to the Summit Avenue bridge, modern bridge beam technology allowed us to design a long single span over the Ayd Mill corridor, thus avoiding impacts to any future plan for Ayd Mill, whatever that may be. 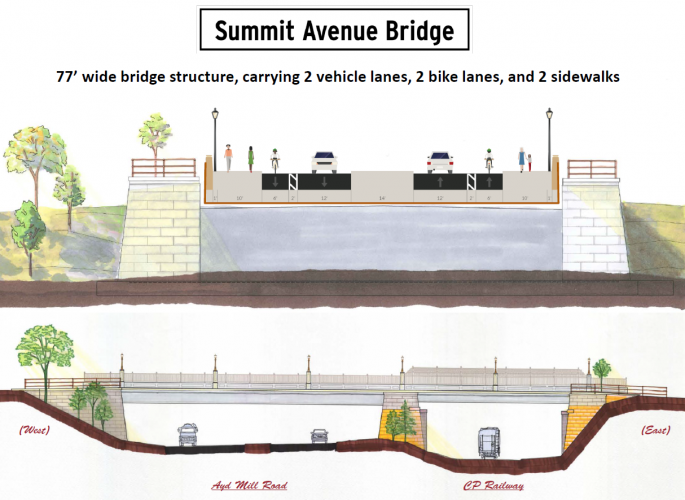 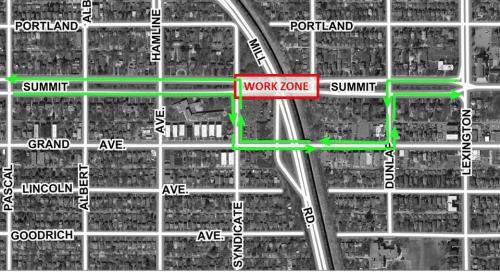 The first community meeting for the Summit Avenue Bridge Project was held on Thursday, April 13, 2017 at the Saint Paul Police Department, Western District.

The second community meeting was held on Monday, August 28, 2017 at the bridge location.  This open house format event was paired with the "Pop Up Meeting" process, a cooperative program between the City and Public Art Saint Paul that seeks to engage community involvement in urban planning.

Parking is allowed on both the north and south sides of Grand Avenue between the Ayd Mill bridge and Dunlap Street.  The parking lane on the north side is between the temporary bike lanes and the westbound driving lane. See vehicle detour map below for location and photo of parking lane. 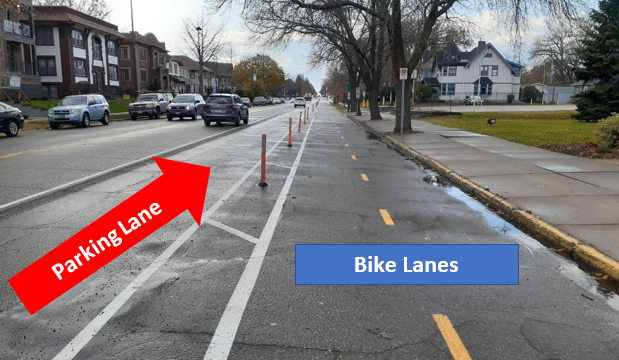