The free, public events provide opportunities for community members and police officers to get to know one another—over a meal and through fun activities. Free hotdogs, hamburgers, potato chips and beverages are served. Faces are painted, bouncy houses are inflated, climbing walls are ascended (thanks to Saint Paul Parks and Recreation) and connections between community members and their police officers are strengthened.

In addition to patrol officers, members of the department’s Canine, Mounted Patrol and Motors Units also attend. Members of Saint Paul Parks and Recreation, the Fire and other departments are also there. 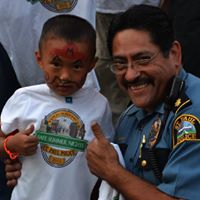 The food is donated by the Safe Summer Nights organization, which is a group of business owners and volunteers who are dedicated to strengthening connections between officers and the people they serve.

The initiative began in 2014. Since then, tens of thousands of meals have been served—and countless relationships have been built.

All events are from 5 to 7 p.m. A complete list of Safe Summer Nights events follows.