Saint Paul police are investigating a shooting that left one man dead and another wounded during the evening hours of Saturday, November 2. 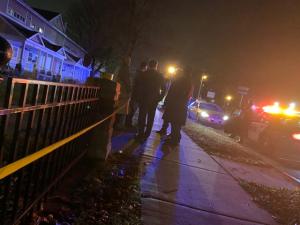 Multiple callers reported hearing gun shots at about 5:30 p.m. Other callers reported that a male had been shot and was lying on the ground in a parking lot on the 1100 block of Hazelwood Street. As officers arrived on scene, they located an unresponsive adult male on the ground in the parking lot as well as a second adult male victim who was inside a car at the intersection of Fellows Lane and Hazelwood Street. Officers called for Saint Paul Fire paramedics to respond.

Both victims were transported to Regions Hospital. The adult male who was originally reported down in the parking lot was pronounced dead at the hospital. The second victim, who was found in the vehicle, has serious injuries and is currently being treated at the hospital.

Preliminary information indicates that both victims were shot in the parking lot, where one collapsed and the other drove a short distance to Fellows and Hazelwood.

Homicide investigators are interviewing witnesses and canvassing the area in an effort to determine what led to the shooting and who is responsible. The department’s Forensic Services Unit is actively processing the scene. Anyone with information about this incident is asked to call 651-266-5650.

This is the 27th homicide in the city this year. That number does not include an officer-involved shooting that resulted in a death, which is currently under investigation by the Minnesota Bureau of Criminal Apprehension.