A woman called 911 early Friday, Nov. 1, to report a shooting on the 1300 block of Davern Street in Saint Paul’s Highland Park neighborhood. When officers arrived at around 2:15 a.m. they found the woman sitting in the passenger seat of an SUV suffering from a gunshot wound to the leg and her husband dead in the driver’s seat. 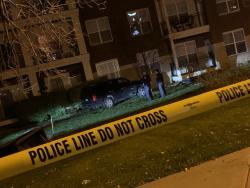 Saint Paul Fire medics were called to the scene and they transported the woman to Regions Hospital, where she was treated for an injury that does not appear to be life-threatening.

Members of the police department’s Homicide Unit also responded, established a crime scene and began collecting evidence, looking for possible witnesses and piecing together exactly what led to the shooting and who is responsible. The Forensic Services Unit will also respond to collect evidence.

The Ramsey County medical examiner will perform an autopsy to positively identify the victim and determine an exact cause of death. This information, along with any updates on the case, will be released on the Saint Paul Police Department Twitter account, @sppdmn.

This is the city’s 26th homicide of the year.