A head-on crash in Saint Paul’s Battlecreek neighborhood on Thursday, Oct. 17 has left a woman dead and three other people critically injured.

People began calling 911 at about 6:25 p.m. to alert dispatchers to the crash, which occurred where Lower Afton Road meets Morningside Circle. Officers rushed to the scene and found several good Samaritans attempting to help the injured. 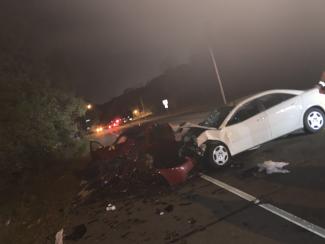 An 18-year-old woman who was ejected from one of the vehicles died at the scene.

A man and woman in the eastbound vehicle suffered non-life threatening injuries.

Investigators are working to determine who was driving the white vehicle, which is believed to have turned west onto Lower Afton Road, and whether drugs or alcohol contributed to the crash.

No arrests have been made as of Thursday night, and the case remains under investigation.