A Saint Paul woman has been arrested for murder after a man was found dead inside an apartment in the city’s Como Park neighborhood on Sunday, Oct. 27. 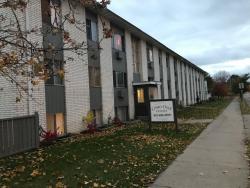 The homicide investigation began after officers investigating another case made an early morning visit to the victim’s apartment on 600 block of Front Avenue. When they arrived, nobody responded to the officers’ knocks on doors or windows. Officers entered the apartment and found the victim, who was deceased.

Patrol officers secured the apartment, called in members of the Homicide and Forensic Services Units as well as the Ramsey County Medical Examiner’s Office.

Throughout the day, homicide investigators interviewed people who may have been with the victim on Saturday night and into Sunday morning. During their investigation, investigators were able to identify a suspect and bring her to headquarters for questioning.

At about 5 p.m. Sunday evening, Evonne Tonette Sharkey, 37, of Saint Paul was booked into the Ramsey County Adult Detention Center. She is being held while the Ramsey County Attorney’s Office reviews the case for possible charges.

This is the city’s 24th homicide of the year.