Our strategies to combat gang violence include prevention, intervention and apprehension. We are committed to working with our community partners to create opportunities for young people.

Our officers serve as educators, mentors and coaches in our efforts to make our neighborhoods safer and improve the quality of life for our entire community.

The Gang/Gun Unit is under the leadership of Commander Jeff Stiff (email). 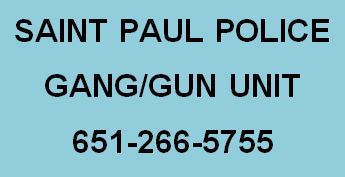 The Gun Unit takes a proactive approach to reducing gun violence in the City of Saint Paul. Officers work closely with the Ramsey County Attorney's Office, the City Attorney's Office and along with State and Federal Attorneys to aggressively prosecute violent gun crimes. Officers work in the community, and in the schools, to educate as well as prevent young people from participating in gang activity and gun crimes.

The responsibilities of the SPPD Gun Unit consists of the following: