As a homeowner, fixing things around the house is nothing new. If you find yourself in a position to need figure out your water meter and its settings, we have a handy guide for you:
Meter Setting Common Practice Guidelines (PDF - 180KB)

Pipes in Your Home

Pipe size and material affects the quality and pressure of your water in your home. You may have copper, galvanized steel, lead, PEX, or a combination of piping materials that move water through your home and deliver it to your tap. Homes built since the late 1990s are mostly piped with PEX, or cross-linked polyethylene. Copper piping began to appear in the 1930s and was most extensively used from the 1960s to now. Galvanized pipes were used between the 1880s and the 1960s. Galvanized pipes are steel that has been dipped in molten zinc. They were developed as an alternative to lead pipes. 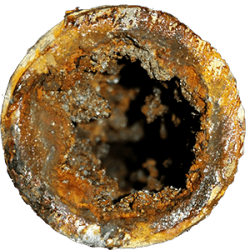 Galvanized pipe loses its zinc coating over years of exposure to minerals in the water, corroding the pipe from the inside out.
Galvanized pipe corrosion:

Some areas of pipe in the home may have more corrosion than others, causing un-even water pressure. The corrosion can release iron and cause discoloration of the water, staining sinks brown. Eventually, galvanized pipe will rust through and leak. If you have galvanized steel pipe in your home, it is likely that it is reaching the end of its life expectancy. Replacing it with copper or PEX might be a consideration if you are experiencing low water pressure, rust, or leaks in your piping.