Shooting leaves one dead on East Side of Saint Paul

Saint Paul homicide investigators are looking for the person who shot and killed a man on the city’s East Side Monday, Sept. 2. 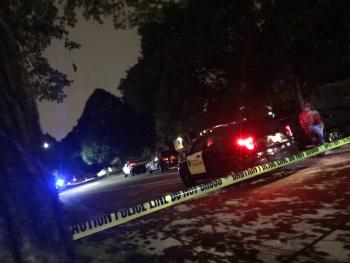 Officers were called to a house on the 1700 block of Ivy Avenue East just after 8:30 p.m. on a report of a shooting. When they arrived they located an adult male suffering from at least one apparent gunshot wound to the abdomen. Saint Paul Fire medics were called to the scene and transported the victim to Regions Hospital, where he passed away at about 9 p.m.

Investigators are currently interviewing witnesses, gathering evidence and working to determine who is responsible for the killing. The Forensic Services is processing the scene for anything that can help investigators determine what led to the shooting and who pulled the trigger.

No arrests have currently been made in this case, however investigators do not believe this was a random act.

Anyone with information about this case is asked to call the department’s Homicide Unit at 651-266-5650.

The Ramsey County Medical Examiner will conduct an autopsy on the victim to positively identify the victim and determine an exact cause of death. That information, along with any updates on the case, will be released on the Saint Paul Police Department’s Twitter account (@sppdmn) when it becomes available.