The Notoriously Destructive Force That Can Help Nature Thrive.

Five out of the eight plant communities in the Classroom depend on fire to function properly as ecosystems. From this location you can see the oak savanna and the shortgrass prairie, two of the fire-dependent communities. Many of the native plant species found in these plant communities have evolved with fire. Native perennial prairie plants have deep root systems and dormant buds that live below the soil surface. This allows them to recover following fires and rebound after drought, outcompeting less fire-tolerant species.

A History of Using Fire 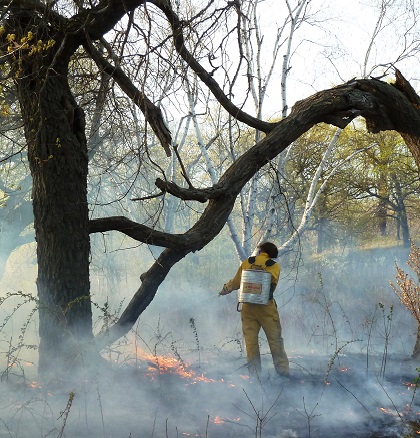 Throughout history, humans have used fire to shape the landscape. In the past, fires were sparked by lightning or intentionally set by Native Americans. These fires had many benefits. The heat from the flames killed small, woody plants and kept prairies and woodlands open for hunting. Fire was also used to remove vegetation and prepare the land for farming. Native Americans used fire to maintain different ecosystems, fostering healthy habitats for the wildlife they hunted and the native plants they collected and used.

In the present day, prescribed fires, also called controlled burns, are an important management tool used by natural resources professionals. As with many urban parks, the presence of invasive species and other undesirable plants in natural areas of the Classroom is unavoidable. When used properly, fire’s effect on undesirable plant populations is easily observed. 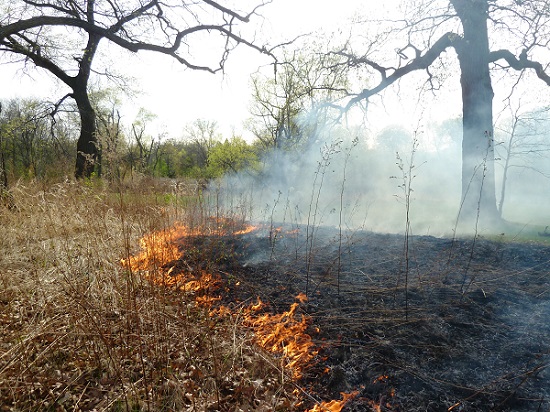 Many undesirable species are “cold season” plants. This means that they are able to leaf out earlier in the spring while soil temperatures are still fairly low. Once the growing conditions are suitable for native plants, the weedy species are already thriving, out-competing the native plants for sunshine, water, and nutrients. Natural resources profes­sionals use this knowledge to appropriately time prescribed fires.

There is a short window of time during which many of the weeds and invasive species have emerged while native plants are still dormant below ground. Using prescribed fire as a management tool allows land managers to effectively knock back undesirable plants that have emerged from the ground after they have expended much of their energy reserves. Simultaneously, the newly exposed and ash-darkened earth absorbs the sun’s energy — warming the soil, kick-starting and extending the growing season for warm season native plants.