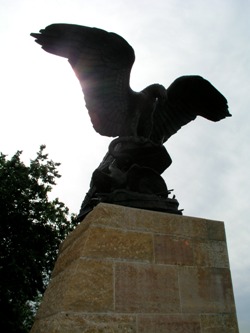 Artist Name: Carved by Louis Saint-Gaudens and designed by Augustus Saint-Gaudens
Media: Bronze with patina
Date Created: 1890
Location: Summit Overlook Park
History: Louis Saint-Gaudens carved the eagle from marble and later made a bronze casting.  The sculpture originally adorned the New York Life Building, which was razed in 1967, to make room for new urban development.  From there the eagle found its way to the Pioneer Building when Watson Davidson purchased it.  Between 1967 and 1999, the sculpture became the property of each new building owner.  In 1999, Public Art Saint Paul secured the sculpture.

Born in 1848, in Dublin, to an Irish mother and a French father, Augustus Saint-Gaudens immigrated to New York with his family when he was six months old.  He studied cameo cutting before he left to pursue art in Europe.  The unveiling of his monument to Civil War Admiral David Farragut established his reputation.  He also designed coins, including the twenty dollar double eagle, which today holds a value between ten thousand and several million dollars.  He died of cancer in 1907.  Louis Saint-Gaudens, his brother, assisted him with some of his sculptures.