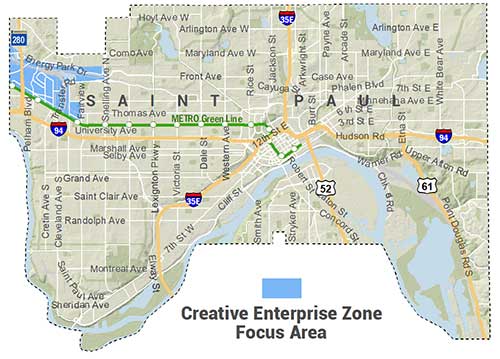 The area’s future is driven by the impetus of at least two critical organizations.

The vision for the Creative Enterprise Zone is supported by an independent non-profit support organization of the same name. The CEZ carries forward a mission of making the area a “livable, mixed-use neighborhood, recognized and sustained as a center of enterprise and creativity.” The Saint Paul Port Authority, a division of local government, guides the future within three of its business centers that together form the industrial backbone of the area.

The CEZ is situated not just midway between downtown Saint Paul and downtown Minneapolis, but also situated midway between the two nearly adjacent campuses of the University of Minnesota. Blessed with an abundance of transportation, the area has long been an industrial hub. Leveraged carefully, Opportunity Zone financing can play a constructive role in writing the next chapter in the area’s continuing evolution.