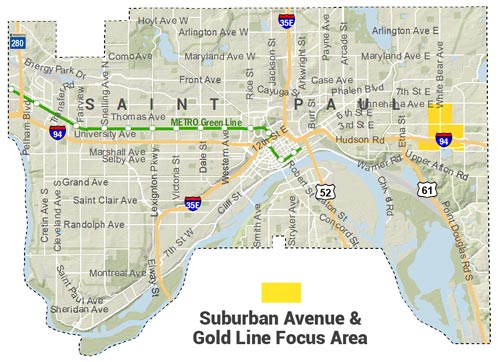 The Gold Line focus area is centered at the heart of Saint Paul's East Side. In the shadow of today's 3M headquarters, neighborhoods of tidy bungalows begin to reflect the mid-century suburban development patterns in the suburbs beyond.  But in the next five years, the Gold Line bus rapid transit is poised to change land use in the heart of this area.

Slated to open in 2024, the Gold Line will bring a new stations and a dedicated transitway connecting downtown Saint Paul to the city's east side, as well as the suburbs of Maplewood, Oakdale, Woodbury, and points beyond. In tandem with the opening of the transitway, Saint Paul has adopted station area plans to guide more dense development patterns in the areas immediately surrounding stations. The White Bear Avenue station will be located near the heart of this focus area, just north of I-94, and is expected to help drive transformations in the land use and market conditions nearby.

To the south of I-94, the core commercial street in this part of Saint Paul is rather curiously named "Suburban Avenue", despite only running through the city. Here too, the introduction of the new transit service is likely to transform some of the aging low-density buildings that reflect the street's name, and transform them into a more transit-friendly model.