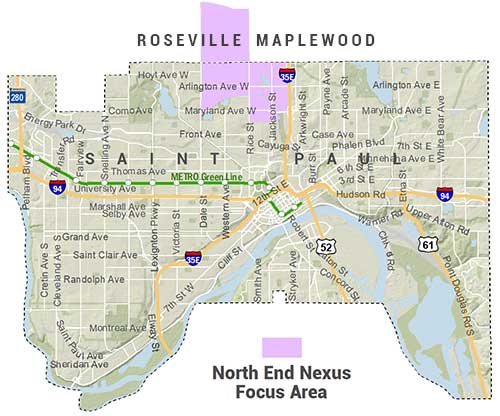 In 2016, four governments came together in an unusual partnership to re-imagine the area around Rice Street and Larpenteur Avenue, which is not only a major intersection on the city's north end, but an intersection shared by three cities as well. Coordinated redevelopment can draw together assets that need to be tied together across these cities.

Three older strip malls and a three-story office building anchor the heart of the Rice and Larpenteur intersection, while institutions from Wilebski's Blues Saloon to Western Bank's office building bookend the area's commerce. Market analysis of the surrounding area show strong opportunities to capitalize on the growing population of children and families in the area, but the kinds of space available may not match the market potential.

Just north of Rice and Larpenteur, the tranquil McCarrons Lake hosts a beach and trails which circle a lake dotted by homes, some modest and some dramatic. The newly-redesigned Saint Paul Grand Round crosses Rice Street a block south of Larpenteur, providing a scenic parkway, biking trail, and walking trail to connect Lake Como to near Lake Phalen.

South of Rice and Larpenteur, Saint Paul is home to many mid-century apartments that have provided an early beginning for young families, while the western edge of the focus area is dominated by a range of tidy bungalows centered on Wheelock Parkway. On the eastern edge of the focus area near I-35E and rail connections, a number of vacant or underutilized industrial sites present significant opportunities for redevelopment.

With momentum from recently-completed planning, smartly-deployed opportunity zone projects will help this area come together to realize its obvious potential.