A daytime shooting in Saint Paul’s North End neighborhood has left a man dead, and investigators are looking for the person or people responsible. 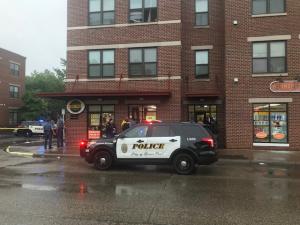 At about 4:30 p.m. Monday, Sept. 9, multiple 911 callers reported shots fired near the intersection of Rice Street and Winnipeg Avenue West. Patrol officers rushed to the scene and found an adult male suffering from apparent gunshot wounds lying inside a corner store.

Saint Paul Fire medics immediately called to the scene while officers rendered aid, but there was nothing they could do for the victim. He died inside the store.

Members of the police department’s Homicide Unit are currently looking for and interviewing potential witnesses. The Forensic Services Unit is processing the scene for evidence. And so far no arrests have been made.

Investigators do not believe the shooting was random.

Investigators note that there were approximately 30 people in the area immediately after the shooting—some of whom may have witnessed what happened. They are asking anyone with information about the case, with video of the shooting, or who knows who pulled the trigger to call the department’s Homicide Unit at 651-266-5650.

The Ramsey County Medical Examiner will conduct an autopsy to positively identify the victim and determine an exact cause of death. That information, along with any updates on the case, will be released on the Saint Paul Police Department’s Twitter account (@sppdmn) when it becomes available.