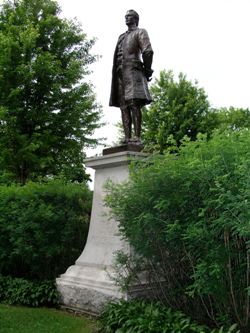 Artist Name: William Ordway Partridge
Media: Bronze w/ dark brown patina; Base: Mount Airy Granite
Date Created: 1/1/1907
Location: Summit Ave. at Portland
History: The Daughters of the American Revolution donated the statue in memory of the American patriot and hero of the Revolution, Nathan Hale.  The first monument west of Ohio to honor the hero, this statue rests upon land donated in 1882, by M.J. Hannaford, Kenneth Clark, and W.J. Jean.  In 1995, Public Art Saint Paul completely cleaned and restored the statue.  After World War II, Lamont Kaufman revisited the battle fields of France where he had fought.  In the Trenches of Bayonets he scooped up a boxful of earth.  This earth now rests at the base of the statue.

Born in Connecticut in 1755, Hale attended Yale College when only thirteen years old.  Once the Revolutionary War broke out, he joined the Connecticut militia.  During the Battle of Long Island in 1776, he volunteered to report behind enemy lines on British movements because his school stood near the British encampment.  After the Great New York Fire of 1776, the British arrested Hale and hanged him.  He died twenty-one years old with the famous last words, “I only regret having one life to lose for my country.”

William Ordway Partridge, born in 1861, in Paris, descended directly from the Massachusetts Pilgrims.  He attended the Adelphi Academy in Brooklyn and the Columbia University in New York before studying sculpture abroad.  He wrote several works about aesthetics and art history, as well as writing poetry and verse novels.  He took a professorship at the present-day George Washington University in Washington, D.C.  Besides public commissions, he produced mostly portrait busts.  Among his works are statues of Pocahontas, Thomas Jefferson, Alexander Hamilton, Theodore Roosevelt, and a mounted Ulysses S. Grant.  Partridge died in New York in 1930.