Structured removal is the removal of blocks of infested ash trees throughout the city. The EAB Management Plan presumes that once trees are removed through this program the stumps will be treated, later removed, and a variety of new trees will be planted.

ALERT! MnDOT is currently removing ash trees along state roadways within the city, including 7th Street and Minnehaha Ave.

2021 Tree Removal: The interactive map below has been updated and reflects currently planned ash tree removals for 2021. Residents in areas near ash removals will receive a postcard in December with information about the removals. Ash removals will begin in January, starting in District 1, and progressing in order through each district.
2022 Stump Removal: All stumps created from 2021 ash removals will be treated with an herbicide (Pathfinder II RTU) at the time of removal to prevent sprouting. The stumps will then be removed in 2022 at the earliest. Stump grinding usually begins in April, but is dependent on weather. Permits will not be approved for homeowners to grind stumps early.
2023 Planting: Replacement trees from stump removals will be planted in 2023 at the earliest. Planting permits will only be approved for homeowners after the stumps have been removed by the City.

2020 Tree Removal: Structured Removal of ash trees for 2020 has been completed. Singular ash trees, outside of this program, identified as priority removals may still need to be completed.
2021 Stump Removal: The remainder of stumps created from Structured Removal in 2020 that have yet to be removed are planned to be removed in 2021. Stump grinding usually begins in April, but is dependent on weather. Permits will not be approved for homeowners to grind stumps early.
2022 Planting: Replacement trees from stump removals in 2021 will be planted in 2022. Planting permits will only be approved for homeowners after the stumps have been removed by the City.

Click on the interactive Boulevard Ash Tree Map below to see where current year removals are planned, which trees are being treated with insecticides by the city, and where ash trees are located throughout the city. 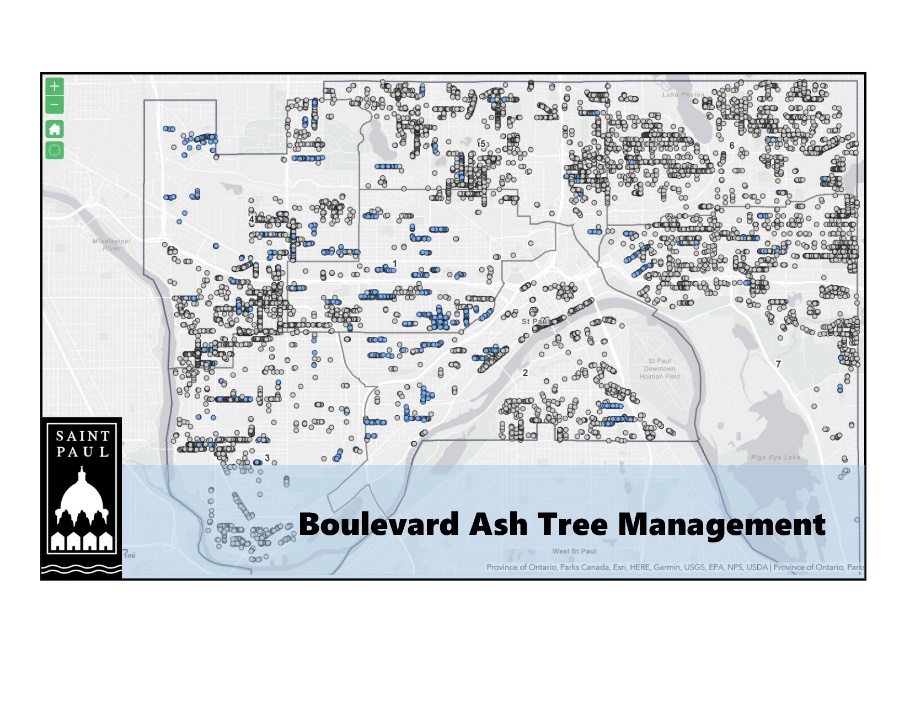 What is Structured Removal of ash?

The City of Saint Paul has, since 2010, employed the "Structured Removal" of ash in order to strategically reduce the total percentage of ash trees on boulevards and in parks throughout Saint Paul.

How are trees selected for structured removal?

In the past, the focus for structured removal was on areas that were planted in a monoculture of ash trees. Trees that were declining from non-EAB related causes such as drought, salt injury, mechanical injury, and structural defects, were selected for structured removal. In general, ash trees become brittle and drop many branches while reaching maturity and are a common source of complaints from residents.

Due to the continued spread of the infestation, and to the general infestation level city-wide, structured removal now encompasses all ash trees. Structured Removal blocks are identified during routine annual surveys and consider factors such as tree condition, density of ash populations on given blocks, and proximity to schools, recreation centers, churches, libraries, and parks.

Why are you removing live trees?

Once an ash tree becomes infested with EAB, it generally takes 3 to 5 years for the tree to die. By removing these trees before mortality occurs, the city is reducing the number of dead and potentially hazardous ash trees in the city. Also, the removal of these trees becomes much more dangerous when they are dead or nearly so. The safety of the citizens of Saint Paul as well as the crews maintaining the urban forest are a top priority.

Why not save the trees with insecticide treatments?

Forestry treats a portion of the high value ash trees on boulevards and in parks that meet the following criteria: