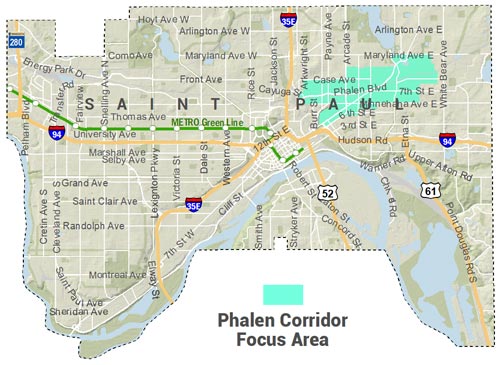 Over the last half-century, the Phalen Corridor area could have been just another example of the ravages of de-industrialization. But strong partnerships have shaped a markedly different story.

Through much of the 20th Century, the area was headquarters of two nationally-known brands - Hamm's Brewing, and the 3M company – and a smattering of smaller companies. Hamm's Brewery went dark in 1997. In 2009, 3M completed its decades-long migration to a larger campus Maplewood. But that was just the first chapter in a longer story.

Starting in the 1990s, city leaders planned a new roadway - Phalen Boulevard - and associated improvements to tie a string of underutilized industrial sites together to freeway access. With the Saint Paul Port Authority repositioning the industrial land, new anchors filled in. Health Partners Neuroscience and Specialty Centers anchors the western corridor. The former brewery now includes successful businesses, including Flat Earth Brewery. In the process, the city capitalized on natural amenities, creating a trail that connected downtown, Swede Hollow, Phalen Creek and Lake Phalen. At the southern edge of the Lake, they transformed an aging, flooded strip mall into a small new Lake and park, and a Cub Foods and soon an Aldi will anchor this heart of the East Side. .