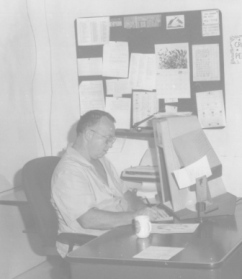 Officer John Kinderman The Saint Paul Police Department had its own Identification Unit until the mid 1990s. We took all prisoner fingerprints and photographs (mug-shots), and we classified each set of fingerprints according to the Henry Classification System established by the F.B.I. Our "Ident" Unit could easily establish the identity of one who might otherwise be truthful about their name. One of the longest serving members of the "Ident" Unit was Officer John Kinderman, who was hired in 1963 and retired in the mid 1990s.

Driving While Under the Influence

DWI Room Up until the late 1980s, the Saint Paul Police Department filmed each DWI arrest at the old Headquarters, 100 East 10th Street, in a special room with a straight line, clock, calendar and chalk board.

Communications Center, 1960s though technology was not yet high speed, the communications Unit in the 1960s was efficient and responsive to Saint Paul citizens. No computers, but dispatchers were able to keep track of all the squads and calls without any difficulties.