Snags and Logs Are the Apartment Buildings of the Forest! Home, Sweet Home.

Why Are Dead Trees Left in the Classroom?

One way land managers act as stewards of the land is by leaving dead trees, also known as snags, standing. Each snag supports a plethora of life. Underneath peeling bark, insect galleries can be found, which are channels carved out by beetle larvae as they feed on the inside of the tree. Small emergence holes may also be seen where the adult beetles exited the tree after their larval stage. Most larval insects that feed under the bark of trees are not detrimental to the overall health of the tree. The larvae of the invasive emerald ash borer beetle (see post 10) are an exception since they kill live ash trees. Other holes seen in snags may be evidence of woodpeckers feeding on insects inside the dead tree. 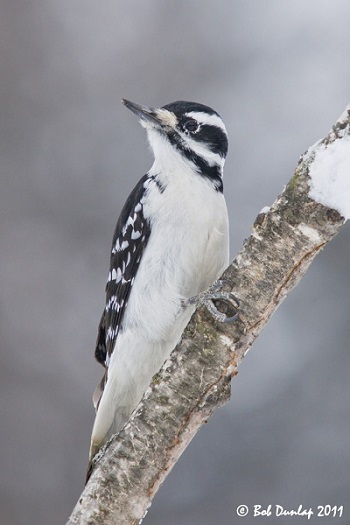 One black-and-white woodpecker that is often seen foraging in the Como Woodland Outdoor Classroom is the hairy woodpecker (Leuconotopicus villosus). Males of this species sport red feathers on the backs of their heads, but otherwise look similar to females. Hairy woodpeckers use their beaks to drill into wood and catch insects with their long tongues.

These woodpeckers also use their beaks to excavate their nests in snags. The nest opening is usually about 2 inches tall and 1-1/2 inches wide, and the internal cavity is eight to twelve inches deep. Similarly sized nesting holes are made by downy and red-bellied woodpeckers. If larger, oval-shaped holes are found, they were probably made by the pileated woodpecker, the largest woodpecker in Minnesota.

Eventually, snags fall down and become logs on the woodland floor. Logs are broken down by decomposers and become soil. This process plays an important role in the ecosystem, recycling nutrients such as carbon back into the soil and air.

The initial decomposers of woody plant matter are fungi. Fungi are not plants since they do not photosynthesize. Hyphae are the white, underground filaments that make up the main structure of a fungus. Mushrooms seen growing on the forest floor are actually the fruiting bodies of fungus. As hyphae gain a foothold into a log, this allows bacteria and beetle larvae to gain access and break down the log further. Fungi feed on woody material, which turn into the soft tissues of the fungi’s mushrooms. 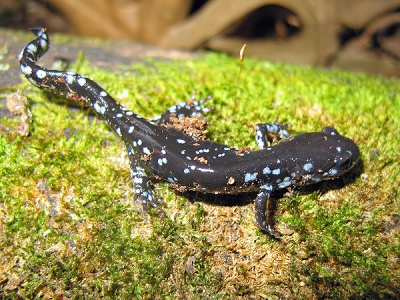