The Como Lake Area Offered Many Edible And Medicinal Plants, Fish, And A Location To Set Up Camp During Seasonal Travels.

Minnesota is the homeland of the Dakota, whose creation story centers on Bdote, the confluence of the Minnesota and Mississippi Rivers. The Dakota followed a seasonal way of life. In the summer, they lived in bark lodges in larger, permanent villages along the Minnesota and Mississippi Rivers, where they grew gardens with corn, beans, and squash. The Dakota village of Kaposia was initially located where downtown Saint Paul is now. Later, the village shifted across the Mississippi near present-day South Saint Paul. For generations, the Kaposia residents and other local Dakota collected wild plants for food, medicine, and dyes, and fished in rivers and lakes. Wild rice was harvested from shallow lakes further north in August. In winter, they traveled in smaller family groups into the woods to hunt deer, and in spring, they made maple sugar and hunted muskrats.

Traveling and Camping near Como Lake 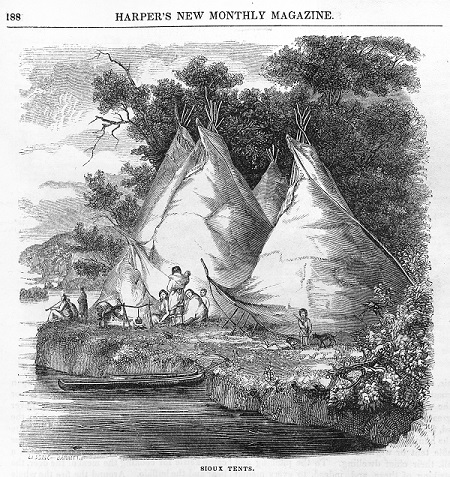 Como Lake was located along the corridor that both the Ojibwe and Dakota used to travel between the rivers, Dakota villages, and Fort Snelling to the south and wild rice lakes, hunting grounds, and Ojibwe villages to the north. Como Lake was a relatively small, shallow lake that covered a larger area than it does today. A much smaller sister lake, Cozy Lake, lay in the crook of Como’s northwestern arm, separated by a narrow strip of land. The area around the lakes consisted of rolling hills with scattered oaks. Because the lakes were shallow, fish would have been small and better suited for eating right away, not drying. The area around Como Lake offered many plants that would have been used for food and medicine. An 1888 list of plants in the area by Como Park’s gardener, Frederick Nussbaumer, includes a wide variety of berries, nuts, forbs, roots, and tubers. The area would likely have served for temporary camping purposes.

A legend recounted by T. M. Newson in 1879 was set on the shore of Como Lake (then called Medewaka according to Newson) and involved the abduction of a young Ojibwe woman, Heleopa, by a group of Dakota. The woman’s brother, Nimpewapa, and a group of friends pursued the captors and retrieved an unconscious Heleopa, but her brother was mortally wounded in the fight. According to Newson, Nimpewapa was buried on a hill near the lake and Heleopa visited his grave, marked by stones and flowers, for 50 years.

A Network of Trails

The written record mentions two trails crossing through the wider Como Lake area. One of the trails cited passed through the farm of Heman and Jane Gibbs, who settled in 1849 on 160 acres three miles west of Como Lake. Members of Cloud Man’s village followed this trail each fall and camped on the farm to visit Jane and rest. Before her marriage, Jane had spent five years living at Lake Harriet near Cloud Man’s village at Lake Calhoun and had learned the language and become close friends with the Dakota.

Another trail followed present-day Lexington Parkway past the Northern Pacific Railroad Shops (now known as Bandana Square) and veered northwesterly between Como Park and the Minnesota State Fairgrounds through land owned by Benjamin Hoyt. The Hoyt land was located less than a mile northwest of Como Lake. The Dakota from Kaposia in South Saint Paul frequently followed this trail. A 1901 Saint Paul Globe article details conflicts that arose in 1850 between the Dakota who used the trail and the Hoyts.

The Dakota way of life began to change as the fur trade developed during the mid-1600s. Hunting and traveling patterns shifted as the Dakota and other local tribes began to hunt more animals and vie for control of hunting grounds. First the French, then the British, and finally Americans moved into the area to establish trading posts, missions, forts, and settlements.

Between 1805 and 1858, twelve treaties were made between the Dakota and United States government. The treaties dislocated the Dakota from their lands and confined them to a small reservation along the Minnesota River. The Treaty of 1837 applied to the lands east of the Mississippi, including the Como Lake area, and soon after farmers, loggers, and land speculators began to pour into the area. After the U.S.–Dakota War in 1862, most of the Dakota were exiled from Minnesota.