Invasive Species Are One of the Greatest Threats to Native Habitats, Causing Millions of Dollars in Damage (Just in Minnesota!) Each Year.

Invasive species are plants, animals, and diseases that are not native to an ecosystem and cause economic, environmental, or human harm. Many invasive species grow and reproduce rapidly, outcompeting native species for resources like sunlight, water, and nesting sites.

Eradicating or completely eliminating many pervasive invasive species is astronomically expensive. Land managers have to weigh the ecological impacts of invasive species against the economic costs of removal efforts, and often define the final goal as reducing invasive species populations to a point that native species flourish.

Below and on the next page are overviews of two invasive species that are threats to the Classroom: 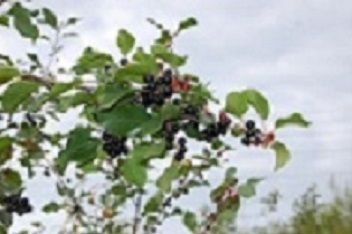 Imported from Europe in the mid-1800s, the buckthorn shrub has had a devastating impact on Minnesota forests. Common buckthorn (Rhamnus cathartica) was heavily planted as hedgerows and wildlife habitat for over 100 years — even here in Como Park. Nurseries stopped selling buckthorn in the 1930s after its invasive characteristics became obvious. Buckthorn seeds are widely dispersed by birds that eat the berries. The unripe berries contain emodin, which acts as a laxative, causing the birds and mammals to excrete the seeds intact before digestion destroys the seed.

Fortunately, Saint Paul Natural Resources and a coalition of neighbors and school groups have made impressive gains in the battle with buckthorn in the Classroom since 2005. Even so, buckthorn can still be found growing in the Classroom today, and buckthorn removal will be an ongoing effort. Effective methods of buckthorn control include removing the whole plant including the roots, cutting and applying herbicide to the stump, or prescribed burning in the first year of growth. 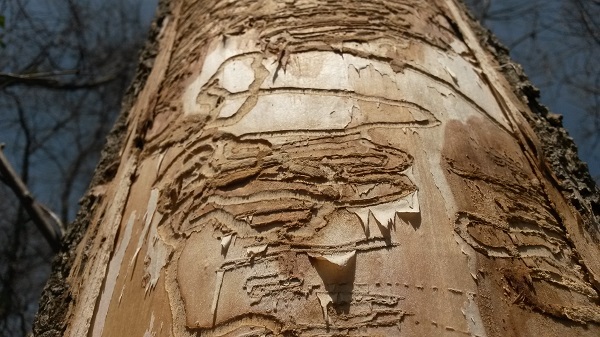 The emerald ash borer (Agrilus planipennis), also known as EAB, is an insect that originated in Asia and likely arrived in the United States on wooden packing material shipped from Asia. It was first discovered in 2002 near Detroit, Michigan. In recent years, Michigan and other states have suffered widespread ash tree deaths numbering in the millions due to this insect. Adult beetles cause little harm to trees; it is the larvae that cause major destruction. EAB larvae live beneath the bark of ash trees and feed on the plant tissues that trees use to transport sugars (phloem), move water and nutrients (xylem), and create new plant tissues (cambium). The larvae effectively girdle the tree by creating vast feeding galleries in the phloem that cut off the tree’s nutrient transportation.

The first confirmed EAB-infested ash tree in Minnesota was discovered in the South Saint Anthony Park neighborhood of Saint Paul in May 2009. Saint Paul Natural Resources is working collaboratively with local, state, and federal agencies on efforts to mitigate the effects of this destructive pest, and use a variety of strategies including the preemptive removal of ash trees on Saint Paul’s boulevards. Other efforts to control EAB include using biological control – releasing natural predators to control pests. Scientists have released two species of non-stinging wasps that target EAB larva.