The Arboretum Contained Paths, a Rustic Entrance Gate, a Large Stone Fireplace, and a Limestone-Lined Cascade and Pool.

In 1935, park superintendent W. LaMont Kaufman identified the area around this post as suitable for the development of an arboretum given its fine trees, rolling hills and valleys, and natural lagoon. He designed a fireplace and a limestone-lined cascade and pool. Kaufman noted that this wooded area, “located in the heart of the city, should be of great scenic and educational value to all nature groups and lovers of wild life.” He planned to plant and label all of the family groups of plants, trees, and shrubs native to this part of Minnesota.

Honoring a War Hero And Poet 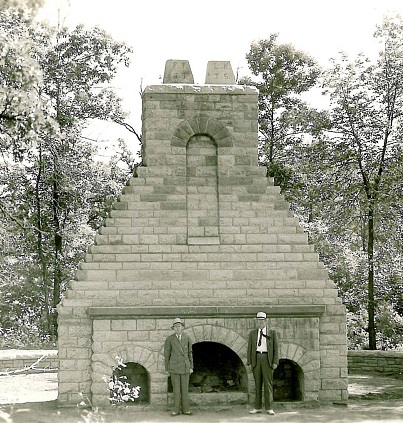 In 1935, when construction in the arboretum was already underway, Kaufman approached the Joyce Kilmer Post of the American Legion, of which he was a charter member, to ask for funds for its development. The patriotic veterans’ organization obliged.

The Kilmer Post was named after poet Alfred Joyce Kilmer, who died while serving in France in 1918 during World War I. He wrote the well-known poem “Trees” in 1913, which begins, “I think that I shall never see/a poem lovely as a tree.” Kaufman, who also fought and was injured in the war, was fond of quoting “Trees” in his work. He had the poem engraved on a wooden plaque that was hung from an oak tree near the fireplace.

Works Progress Administration crews completed construction of the fireplace and the limestone cascade and pool in 1936. The fireplace design incorporated an old three-arched drinking fountain from the nearby streetcar station and stones from a home on Summit Avenue. Many conifers were planted around the cascade and pool. The conifers planted during this effort are now a part of the Classroom that repre­sents the pine-oak woodland plant community. 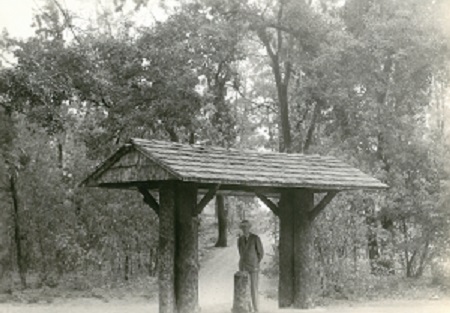 I think that I shall never see
​A poem lovely as a tree.
A tree whose hungry mouth is prest
Against the earth’s sweet flowing breast;
A tree that looks at God all day,
And lifts her leafy arms to pray;
A tree that may in Summer wear
A nest of robins in her hair;
Upon whose bosom snow has lain;
Who intimately lives with rain.
Poems are made by fools like me,
But only God can make a tree.

Over the decades, the arboretum fell into disrepair. The area’s remoteness attracted vagrants, vandals, and dirt-bikers. The arboretum became more secluded when streetcars stopped running through in 1953, and even further secluded when sections of Como and Beulah Lane were removed in 1985.

In the years that followed, the cascade stopped running and became completely overgrown. The fireplace, nicknamed the “Dutch Ovens” by locals, sat covered in graffiti and crumbling inside a low chain-link fence. The arboretum became overrun by buckthorn and other invasive plants.

In 2003, community volunteers began to clean up the park and explore the idea of an outdoor classroom. Today, thanks to these efforts, many Arboretum features were restored and the Como Woodland Outdoor Classroom welcomes visitors to learn about native plant communities.