A Variety of Organisms Contribute to Healthy, Strong Ecosystems. 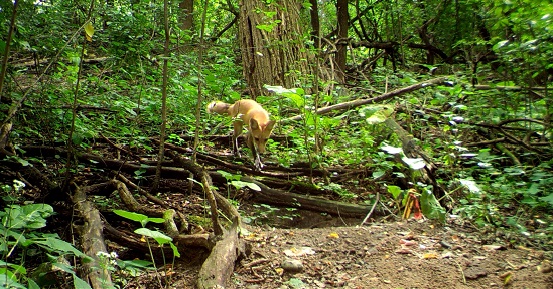 Species diversity, the variety of living organisms, is an important measure in an ecosystem. For example, in a healthy forest, there is a variety of trees, shrubs, and wildflowers to support a range of wildlife. In a diverse ecosystem, a disturbance that wipes out a single species is unlikely to be catastrophic because other species can adapt and fill the vacant niche (role in the environment). Land managers use this knowledge in planning restoration work, and take care to include a diversity of plant species. This in turn supports species diversity in the rest of the food web.

Conversely, a system with low species diversity is vulnerable to disturbance and may collapse. One example of a disturbance is the introduction of a non-native invasive species. In the past, Saint Paul and many other communities relied heavily on elms as boulevard trees. The vast majority of these trees died after Dutch elm disease (DED) was introduced from Europe in the 1960s. Ghostly white elm snags may be found in the Classroom; they were likely victims of this fungal disease. Saint Paul had to replant many of its boulevard trees, but again relied heavily on few species, especially green ash. Another non-native invasive species, the emerald ash borer (EAB), was first detected in 2009 and is expected to kill a majority of the ash trees across the city. To guard against a future threat to the urban tree canopy, Saint Paul’s forestry unit is replanting with a wider variety of tree species.

Even ecosystems with high species diversity can be threatened by invasive species. Other threats to diversity include habitat loss, pollution, and climate change. Some plants and animals will be unable to adapt to climate change quickly enough, and will be lost.

Healthy ecosystems support many food chains, the connections between a food source and its consumer. The chain starts with producers, organisms that can create their own food, which are generally photosynthetic plants. Consumers make up the next few links in the food chain. They are generally animals and can be herbivores, carni­vores, or omnivores. Food chains do not end with a top predator; the decomposers (bacteria and fungi) and detritivores (such as earthworms and snails) recycle nutrients to the soil, and in turn, to the producers.

Let’s follow one simple food chain in the Como Woodland Outdoor Classroom. In the tallgrass prairie, herbivorous rodents called voles eat the leaves of big bluestem. The vole is hunted and eaten by a carnivorous red fox and her kits. When the fox eventually dies, decomposers break down her body and return the nutrients to the soil. These nutrients are then used by big bluestem.

Food chains seem very straightforward, but interactions in an ecosystem are usually much more complex. Often these interactions are better described by a food web, which is a series of interacting food chains. In the previous example of big bluestem, the vole, and the fox, many more interactions are occurring. In the bigger picture, big bluestem leaves are eaten by cater­pillars, grasshoppers, and katydids. Voles are also eaten by great horned owls, and foxes eat many more species than just voles.