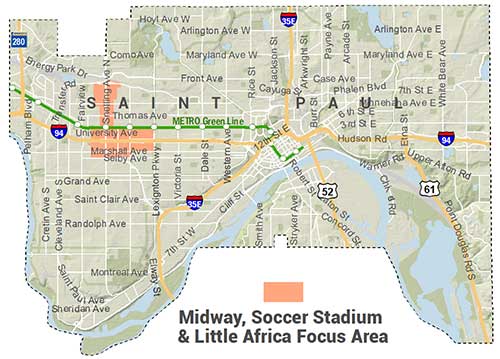 Right in between downtown Saint Paul and downtown Minneapolis lies a neighborhood embracing a thrilling new future. At the heart of Saint Paul’s Midway neighborhood, aging big boxes and a strip mall have given way to a new soccer stadium as the community around it is being transformed.

From its opening in 2019, Allianz Field will be the home of the Minnesota United Football Club – the Twin Cities’ major-league soccer team. Seating about 19,400 fans, and situated at the crossroads of METRO Green Line light rail, A Line bus rapid transit, and Interstate 94, Allianz Field is expected to set in motion a long-awaited transformation of the balance of the 34.4 acre site, and beyond.

A master plan has been adopted to guide development on the site surrounding the stadium, focusing on a mix of office, residential and retail uses. And already the market is responding. Major market rate housing projects are coming to fruition – the Vintage Apartments with a new Whole Foods, and the O’Garas building. And we know more are on their way. .