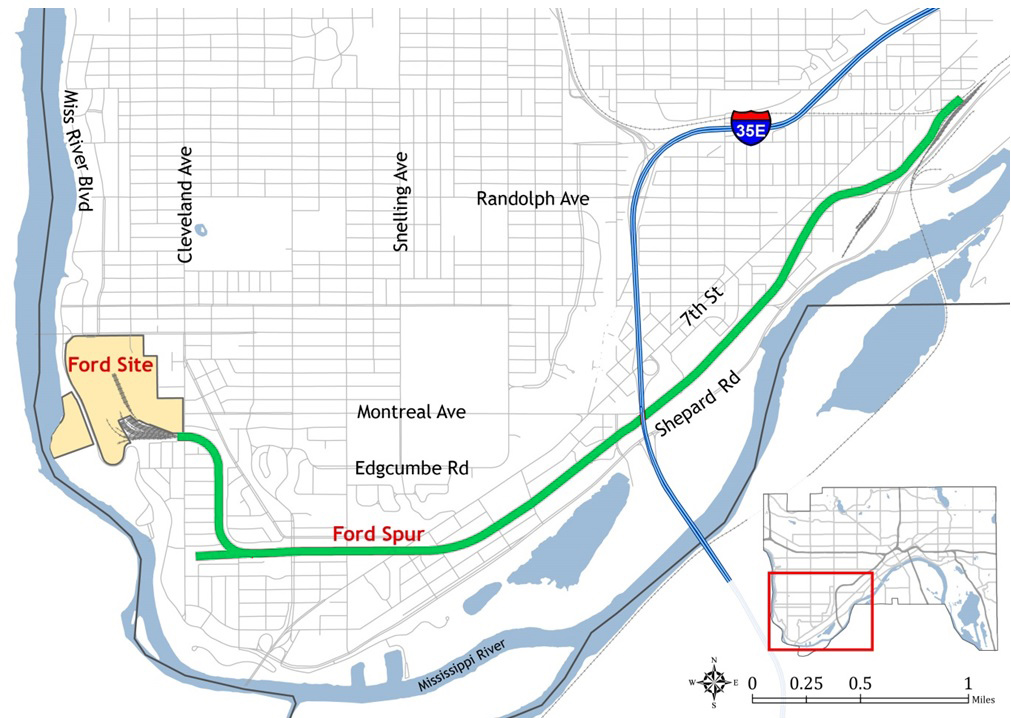 The City of Saint Paul conducted a study to re-imagine the potential of the Ford Spur, a five-mile rail corridor in Saint Paul. The Ford Spur connects the West 7th and Highland neighborhoods of Saint Paul and is owned by Canadian Pacific (CP) Railway. The Ford Spur was originally used to serve the Ford Twin Cities Assembly Plant (Ford Site), which closed in 2011 and is planned for mixed-use redevelopment. With the railway no longer in use, there is potential for the Ford Spur to be remade into a vibrant recreation and transportation resource that can serve Saint Paul residents well into the future.

This study examined opportunities to redevelop the railway to serve pedestrians and bicyclists for decades to come while evaluating scenarios with and without public transit. The Ford Spur study will not influence the decision of whether or not to construct transit in the Ford Spur. This will be decided as part of the Riverview Corridor and Ford Corridor transit studies.

Following a Request for Proposal (RFP) process, the City chose Alta Planning + Design as the consulting firm to conduct the study, with partners Kimley-Horn and Sambatek. The $200,000 study is funded largely through a $100,000 Transportation Investment Generating Economic Recovery (TIGER) grant from the U.S. Department of Transportation. Other funders include Ford Motor Company, East Metro Strong, and the City of Saint Paul.

View the Study View the Appendix

Public input was a major component of the feasibility study to envision possible future use of the corridor. A series of open houses was held during each phase of the project. Information on additional outreach is available in the report.