Give It a Little Fire and Watch It Go!

The largest plant community in the Como Woodland Outdoor Classroom is the oak woodland. The tree canopy is dominated by bur oak and northern pin oak, and includes shrubs such as chokecherry and American hazelnut. It grows on sandy, dry soils and is dependent on fire to renew itself.

Why Do These Woodlands Look so Different from Prairies and Forests If They Grow on Similar Soils? 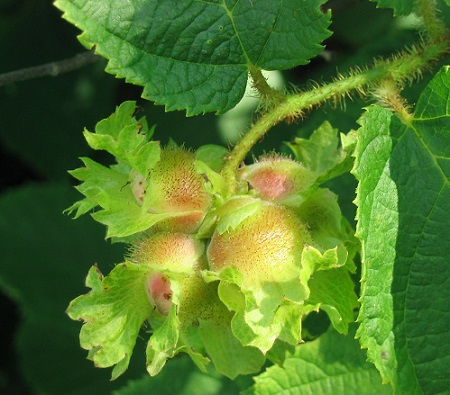 Differences in vegetation can be explained in large part by the frequency of fire. Prairies burn regularly, and are therefore dominated by grasses and forbs with few trees. Prairie grasses have adapted to frequent fire, but trees usually cannot survive intense and frequent prairie fires. Forests rarely burn, and thus have a closed tree canopy. Fire in oak woodlands occurs about every 10 years during droughts or exceptionally dry spring or fall seasons. As a result, woodlands have less canopy cover than forests and drier conditions on the ground.

Rather than being a destructive element, fires in oak woodlands help the plant community regenerate. Plant species in oak woodlands are good at surviving fire and growing on newly burned sites; they can out-compete other plant species that lack these adaptations. Many oak woodland plants store energy underground and quickly resprout after a fire. For example, when trunks of bur oaks are killed by fire, the tree resprouts from below ground using energy stored in its root system. Additionally, fire can help oak seedlings by periodically clearing away small trees and shrubs to allow for more available sunlight.

In oak woodlands, some fire-sensitive species such as basswood grow alongside oaks. Without fire, oaks are unable to compete with these species, and maple-basswood forests could succeed the oak-dominated landscape. Land managers now use prescribed fires to create favorable conditions for oak woodlands and other fire-dependent plant communities to thrive. 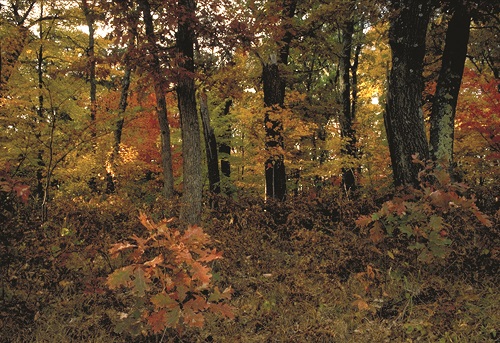 Fires started by lightning and by humans have shaped the landscape for the last 10,000 years. Native Americans used low-intensity fires extensively to encourage the growth of nut-bearing trees such as oaks, to improve hunting success, and to clear land for agriculture. Between the 1500s and the 1800s, the Native American population declined approxi­mately 90 percent due to diseases introduced by Europeans and conflict. Migration, change in land ownership, and forced removal shifted Native Americans off their traditional lands. Agricultural fields and other managed lands were abandoned along with the fire practices that maintained them.

While early settlers initially used fire to clear land for crops, once fields were established, plowing prevented trees from creeping in and fire was no longer used. Settlers then actively tried to prevent natural fires from threatening crops, homes, and timber stands. Land that was not converted to cropland or logged soon became closed-canopy plant communities.